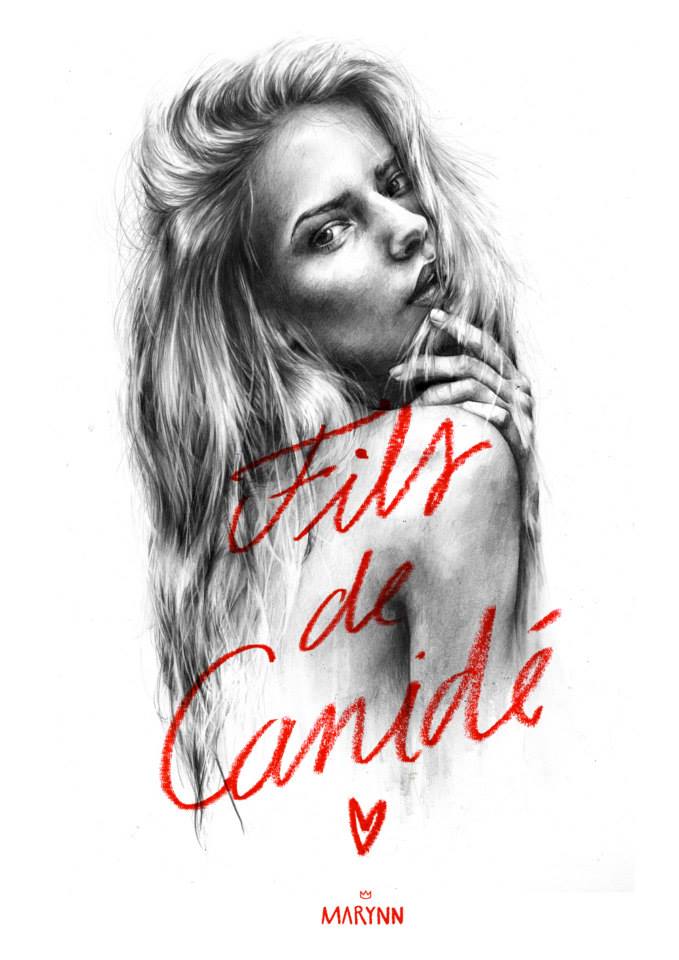 “Testosterone is a testosterone killer”… They’re not completely wrong. Anyway, it’s pleasant to have some sweetness among our bullies world. For this collection we decided to collaborate with Marynn, (almost) the coolest girl ever from L.A. *, to get a breath of fresh air.

Her illustrations are like a magic mirror supposed to make reality, people and situations cooler, careless and poetic. Whatever, we met at a small café terrace roof during a sunny afternoon.

Hello Marynn, you look terrific and your suntan is perfect! Where have you been on holiday?

I was in Biarittz to blow some cash in the casino behind my Mercedes wheel.

Anyway, it’s very nice of you to be so quick about this chatting session. So, let’s not depart from the rules and start from the beginning… Can you tell us shortly who you are?

I’m the incarnation of a watermelon featuring Delarue

As you can easily guess, we’re gonna talk about your illustrations. They are so crazily realistic, what is your work method?

It always begins from an obsession, a musical or sentimental one (need tissues…)

I’m that kind of girl who listens to the same song over and over as I draw (I have no television).

I generally find the message first and then compose according to it.

There’s often a second meaning to my illustrations, my close people generally know what it is about.

If you had to describe your world in three words, what would they be?

What attracts you to the realism?

I love to recognize myself into the drawing.

What are your spheres of influence?

There’s nothing in particular. I have a nice library of my favorite illustrators’ books… I’m truly in love with Sir Edward John Poynter’s style painters.

I gobble up tones of pictures on the net; my macbook suffers the consequences of my actions.

I’ve noticed that your characters sometimes wear crowns, can you tell us why?

One of the craziest things I’ve ever done, because:

2-      I’ve never looked that much like a hermit – dead body – ashtray before. (My best friend had to bring me pizza to have me fed. (I had only one week to create it))Hamdi Ala

As concerns our collaboration on the FW12 collection, you’ve made three very successful illustrations. Was it your first collaboration with a clothing brand?

Nope: I’ve already worked with the boys from PLAYART; you were the second brand who called on my madness.

If we have had the time machine, where and how would you imagine yourself in 10 years?

Let’s not talk about it. It freaks me out!

All right then Marynn, thank you for answering to my few questions… A last one to end up with, what’s next on your schedule?

A plate of pasta.

Sorry for the inconvenience.

Search again what you are looking for

Desperately Seeking Susan
WHY DON’T WE START WITH THAT?
Menu
results
Forgot your password ?
Need help?

Please follow the following instructions in order to submit an Order:

After you have submitted an order, the Customer receives by email and without delay a confirmation of his approval of the Order.

The Customer also receives by email and without delay, a receipt of the order sent electronically, regarding as a confirmation of the order (“Order Confirmation”).

The Customer receives electronically, the confirmation that the Goods have been dispatched.

The delivery shall take place at the location indicated by the Customer at the time of the Order.

Additionally, by undertaking these different steps to Order, the Customer accepts to strictly comply with this Agreement, in accordance with section 1316-1 of the French Civil Code.

The Vendor undertakes to deliver the Goods and Services subject of the Order Confirmation. In the event that a Good ordered is unavailable, the Vendor will promptly inform the Customer about this.

The place of Delivery shall be determined by the Customer within the Territory, under sanction to refuse the Order.

The Customer is exclusively responsible for any error in the Delivery due to a lack of indication contained in the Order.

The Delivery Charges are free if the amount exceeds EUR 200,00.

Delivery Terms are available for review on the Website. They may change depending on the availability of the Goods subject of the Order.

Delivery Terms are expressed in working days and correspond to an average time for preparing and shipping the Order to the Customer.

Delivery Terms shall begin to run at the Order Confirmation date.

In the event of delays in the Delivery, the Order is not cancelled. The Vendor shall inform the Customer by electronic mail that the delivery will take place later than what was contemplated by the Parties. You will be then entitled to decide whether to confirm or cancel your order and shall send to the Vendor a cancellation notice of the Order at service-client@olow.fr.

If the Order has been shipped at the time the Vendor receives cancellation notice, the Customer is still entitled to cancel the order by refusing the Delivery. The Vendor shall then reimburse the Customer of the payment he/she made, within fifteen (15) days from receipt of the returned products in the same condition as they were sent and must have their original label. The return expenses remain at the cost of the Customer.

Europe outside the E.U.

You have received your order but the product does not suit you?

You can return your products within 15 days of receiving your package, for any order.

The items must not have been worn, washed or damaged and must be returned in their original packaging, in perfect condition for resale.

How do I return my package from France?

To return your parcel, it is very simple :

Want to make a return request with a guest account?

It's very easy : contact us by email at service-client@olow.fr indicating your order number, the items you wish to return and whether you wish to request a refund, a credit note or an exchange.

The return costs are at the customer's expense (cost of shipping by the transporter chosen by the customer and any other related costs: customs duties, taxes, etc.).

How long does it take to get my money back once my package has been sent?

Refunds will be made within 10 days of receipt of your items and automatically to the account associated with the credit card used for payment or to the Paypal account used for payment.

Is it possible to return my item in the shop?

No, for all internet orders, returns can only be made to the address mentioned above.

What can I do if my item has a defect?

We take great care in the manufacture and finishing of our products. However, if you wish to report a manufacturing defect on a product, we invite you to contact our customer service by e-mail: service-client@olow.fr.

Give me some news !
But where is Olow?
Olow stores       Our retailers